A Brief History of Olveston 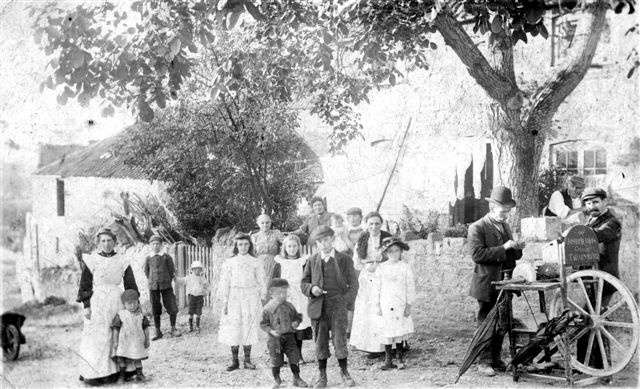 Olveston - Visit of a Knife Grinder

The parish of Olveston comprises Olveston, Tockington and Oldown. Its boundaries have changed little since Saxon times. Elberton was originally part of the parish, but became a part of Aust Parish, leaving Cote as an isolated part of Olveston: a curiosity which lasted until 1885.

Orginally, Tockington was not a part of the parish, but it had clearly become so by 1742. At that time the parish extended beyond the A38 to include Tockington Park Farm as well as old St. Helen's Church at Rudgeway. This area passed to Alveston in 1935, but a part of it was returned in 1988 when an area of the north east of Olveston Parish (Wolfridge) passed to Alveston Parish. At the same time, land to the south of Olveston was passed to Almondsbury.

The Domesday Book records 66 inhabitants in Olveston and Tockington villages at the end of the 11th century. The next record of population was made in 1711, when the two villages and surrounding land are recorded as having 240 inhabitants. The population rose rapidly over the next century and a half, reaching 1740 in 1871 but fell to 1240 in 1951. It peaked at 2550 before the 1988 boundary change. In the 2011 census it stood at 2033.

The name has changed many times over the centuries. Domesday has Alvestone, probably derived from the Old English Aelfestone - Aelf's Farmstead. In the 12th century the initial A was changed into an O. Up to the 17th century the name changed a dozen more times, passing through Ulvestone, Oldeston and Wolston to, eventually, Olveston.

In the 17th century, the village became home to several members of the Quakers - details can be found in our section "Historical Buildings."